False Bay (Afrikaans Valsbaai) is a body of water defined by Cape Hangklip (Dutch/Afrikaans for “Hang(ing)-rock”) and the Cape Peninsula in the extreme south-west of South Africa. 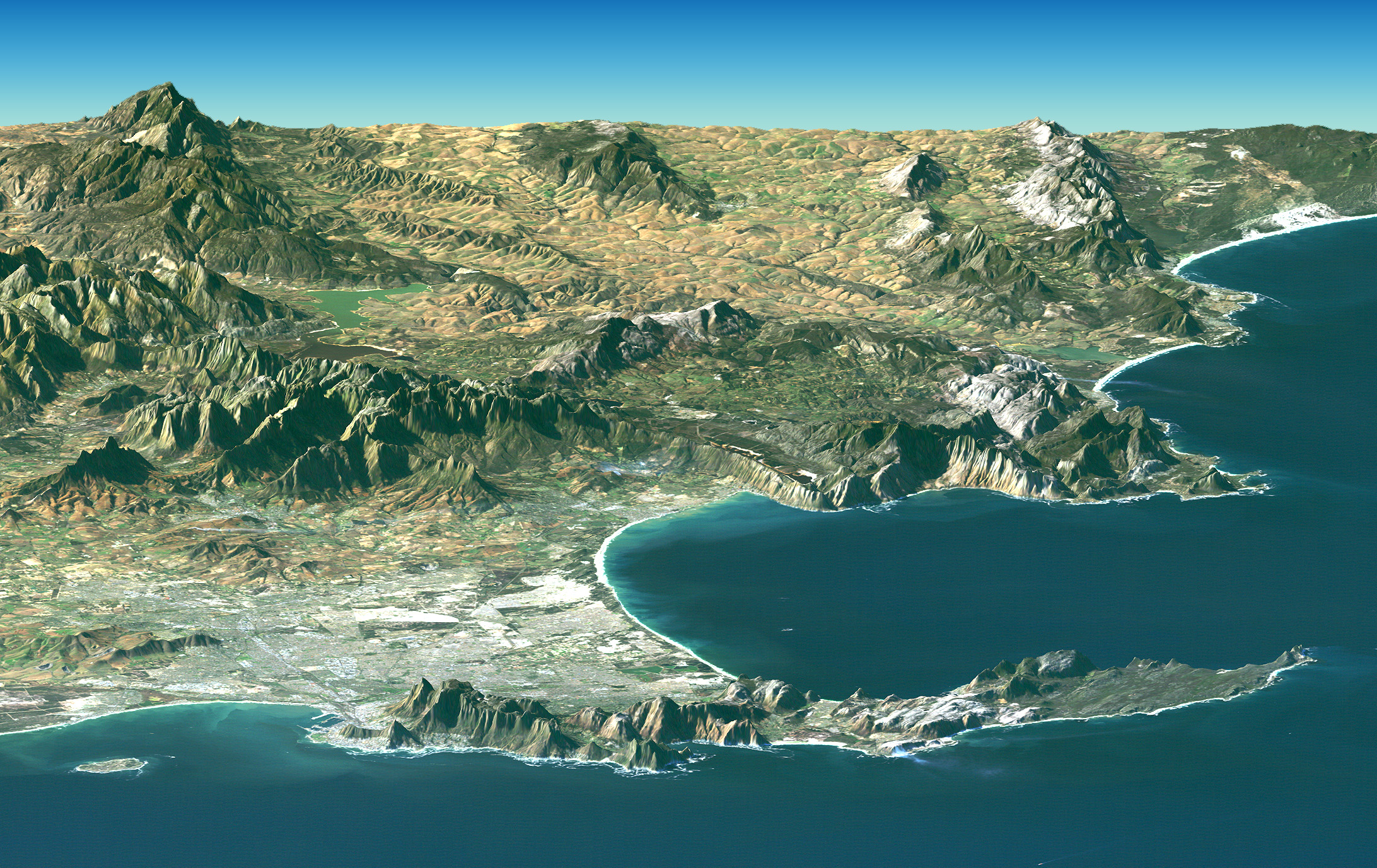 The eastern and western shores of the bay are very rocky and even mountainous; in places large cliffs plunge into deep water. Notable peaks associated with the bay include Koeëlberg (1289m / 4229 feet), which rises from the water itself forming the highest point of the Kogelberg, as well as Somerset Sneeukop (1590m / 5217 feet) and Wemmershoek Peak (1788m / 5866 feet) which are clearly visible across the bay. The highest peak visible across False Bay is Du Toits Peak near Paarl (1995m / 6545 feet). The northern shore, however, is defined by a very long, curving, sandy beach. This sandy, northern perimeter of the bay is the southern edge of the area known as the Cape Flats. The bay is 30 kilometres wide at its widest point.[1]

Bartolomeu Dias in 1488 first referred to the bay as “the gulf between the mountains” (Schirmer, 1980). The name “False Bay” was applied early on (at least three hundred years ago) by sailors who confused the bay with Table Bay to the north. According to Schirmer, the confusion arose because sailors returning from the east (The Dutch East Indies) initially confused Cape Point and Cape Hangklip, which are somewhat similar in form. Hangklip was known to the early Portuguese seafarers as Cabo Falso, or False Cape, and the name of the bay derived from the cape.

The climate is Mediterranean, with warm, dry summers and cool, damp winters. In winter gales and storms from the northwest are common and can be ferocious. False Bay is exposed to southeasterly winds in summer and its waters are approximately 6 °C warmer than those of Table Bay, owing to the influence of the warm Agulhas Current.

Fishing is good in False Bay and at times there are large schools of snoek, an oily, barracuda-like fish that is much sought after locally. Angling from the rocky shores to either side of the bay is very popular, but dangerous. The shape of the bay creates interference patterns in the swells that come in from the Southern Ocean and these patterns occasionally combine to cause “killer waves” to rise up without warning and to sweep the sandstone ledges well above the high tide mark. Scores of fishermen have been swept away and drowned over the years, but this seems to have done little to dampen enthusiasm for the sport.

Sailing is also a popular recreational activity in False Bay. The “killer waves” mentioned earlier can wreak havoc with moored sailboats, especially if the moorings are chain based and on the leeward side when the south-easterly winds are howling up the bay. The sailing clubs in False Bay include False Bay Yacht Club in Simon’s Town, Fish Hoek Beach Sailing Club at the main beach in Fish Hoek, Gordon’s Bay Yacht Club in the Gordon’s Bay Harbour, and Hottentots Holland Beach Sailing Club in Strand. There is a small granite island in the bay (not discernible in the image above) called Seal Island, which is one of the main breeding sites for the Cape fur seal. (Seal Island can be seen in a scan in the article on the Cape Flats). The seals attract many great white sharks and some of the biggest sharks ever seen have been spotted in these waters. These sharks are famous for the manner in which they breach the surface of the water while attacking seals, sometimes jumping entirely out of the ocean. Despite this, swimming, surfing, yachting, scuba diving and so on are popular pastimes around the bay, at centres such as Muizenberg, Kalk Bay, Smitswinkel Bay, Strand and Gordon’s Bay. Shark attacks are generally uncommon but by no means unknown, with two deaths since 2010.[2]